The place to discuss anything relating to anime or manga.
Post Reply
79 posts

Henyo wrote:and, how many forms will this Aquarion have? i already lost count. i do like the rabbit one.

In theory this Aquarion in particular can have any number of forms with all the Vectors able to combine in any way. It even has different combinations for whether a Vector is on top or bottom. Theoretically that means that in terms of math compounding the total number of combinations should probably be calculated, assuming every single possible combination of Vectors is possible, 6P2 + 6P3 + 6P4 + 6P5 + 6P6. If my math is correct that means that Logos Vectors could make a total of 1950 unique combinations with just the six machines.
THE WORLD IS NOT SQUARE
Top 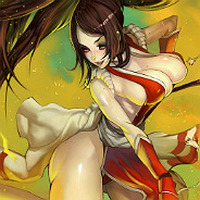 I was about ready to give up on this series until the Akira/Maia love train rolled along this week's episode FINALLY!

As for poor Subete, i hope the way the ep. ends doesn't mean he gets whacked so early in the show's run but since Sougon is the master villain and not his offspring, it could go that way.
Top

Yeah, about time something resembling a romance developed between those two.
"In the end, the world doesn't really need a Superman... Just a brave one."
Top

SO gratifying and satisfying to see Akira put the smackdown on Sougon who shows more irredeemable qualities in his character that his and Subete's alleged demises were well fitting. The Nesta spirit has now taken form and i gather it's going to try to fulfill it's destiny with a certain savior, since the episode establishes that ALL Aquarion pilots can be saviors too.

I love the "A Ku Ei Ri Ou On" kanji gag. For some reason I eat stuff like that up.

I think that episode 13 has actually proven that Logos can hold a little drama in its cup even if I prefer it to be the quirky, dialogue-heavy comedy. It's keeping us guessing as to who might be who, since the clap suggests Saviorman is Fudo, even though dialogue in previous episodes implies he's just some random dude unrelated to reincarnations.

Oh, and I love the battle OST for Logos even if I like the version with the hip-hop more.

Let's hope it can keep up the pace.

PS: I forgot to mention this, but "Kazenari no Tsubasa." Satelight, you silly.
THE WORLD IS NOT SQUARE
Top

Nice Sakurako centered episode with more background on her and Sougon and all but still felt like filler with the babysitting part. Also, they're STILL using the same OP and ED themes which i thought would be switched by now.

Aquarion is usually late with switching op/ends.
"In the end, the world doesn't really need a Superman... Just a brave one."
Top

as far as fillers go ep 14 is good. the BGMs near the end is eerily similar to some tracks from Hikari Sentai Maskman.

and Tsutomi still has the best jokes. Re Zouko!!!
those next episode previews are getting funny.. just like Cross Ange's.

MOOK: ITS A YURI FANBOY!
Top

Yea verily the episode previews have been great.

I admit to have given up on following story trajectory in this show. It's been an episode by episode journey through the strangeness and the savior-ing, with a pleasing retro aspect to the cast. I also regret my Japanese isn't good enough to follow along through the kanji-switching which obviously has a lot of meaning. Sort of like all the word-play in Inou Battle which was quite overwhelming at times, to the point where it was lampshaded in-story.
"I am fire. I am death. I am Hashmal."

"Discontent is the first step in the progress for a man or a nation." - Oscar Wilde
Top

Zeonista wrote:I also regret my Japanese isn't good enough to follow along through the kanji-switching which obviously has a lot of meaning.

i hear ya on that part. which is why i consider myself lucky that i have a friend who knows japanese well enough that she's(ayup, a girl.) the one translating for Goldran for a fansub group.

actually, i said to friend that one incentive in watching Logos is the Kanjis that pop up. them are obscure and unorthodox.

MOOK: ITS A YURI FANBOY!
Top

The latest episode sends up a neat Ghostbusters satire complete with theme song. At first, it feels corny but then it grows on you. I DEFINITELY must stay tuned for next episode with the cliffhanger revealing a possibly resurrected Subete which gave even Akira the usually stoic the goosebumps.
Top

Not often that an extended Ghostbusters parody is the moment your series takes the plunge deep into the serious end of the pool. Loved it.

Episode 16, wow, it's absurd how well Logos has been able to handle the serious stuff when I thought the serious plotlines in both previous Aquarions were kind of a drag. Humanizing Sougon after his death, and giving a new perspective on Subete as well as showing how he's truly the Chosen One?

I was a bit weirded out when Sougon had a different voice actor for his younger scenes since he was an adult, but I suppose 20 years can change you. The actor doing his best attempt at sounding like Nakata after activating the Book of Sousei was a neat touch.

Also, wow, Subete has some huge Kotomine vibes going for him. Considering his pops is voiced by Nakata, I'm sure they knew what they were doing.
THE WORLD IS NOT SQUARE
Top

Maybe it wasn't coincidence that i was watching the first X-Men movie and found parallels between this episode and the film's scene of Wolverine saying "You sure you're on the right side?". I found Sougon and Subete's earlier days to be far better entertainment than all of Shirobaco gang's previous exploits put together.

I REALLY hope against all hope that next week comes the second OP and ED songs to replace the stale ones that i HAVE to skip over to maintain my sanity at this point.
Top

No AKINO for this Aquarion! good thing i didn't put too much hope in that happening.

anyways, Eps 14 and 15 really got the balance of humor and seriousness good. also note worthy is that they had no mecha action.

is the OST out? i want to know the name of the Ghost busters theme BGM!
MOOK: ITS A YURI FANBOY!
Top

New OP and ED. They're okay. I think they must've mixed up the songs, though. Then again both of them sound like OPs.

The plot thickens, and unlike the earlier Aquarions they're actually keeping things easy to follow. It seems like they really do want to examine what the dream of being a hero (or in this case Savior) entails, or they might have finished up with that plot.

The upgrade looks great.
Spoiler
Show
I'm actually shocked that the eponymous Logos is going to be an enemy. Though it actually kind of makes sense since they're suggesting that Subete is the chosen reincarnation and Akira is just a random guy that they'd give Subete the legendary super-special Aquarion and Akira needs to get the dangerous "evil" Vector. Interesting role reversal.

Henyo wrote:is the OST out? i want to know the name of the Ghost busters theme BGM!

Apparently the OST actually launched on the 23rd. But I'm not sure if it'll have Yuurei Busters, that might get put onto an OST2 (which is inevitable since the TV Size versions of the second OP and ED aren't on the OST's tracklist).

P.S. Did they actually confirm the subtext that Hayato's a lolicon?
THE WORLD IS NOT SQUARE
Top

2nd Aquarion openings are always sub par because they just reuse clips from the show rather than animate anything new.

Akira's character arc is pretty much Fate/Stay Night all over again, but it's still decent enough. I'm just glad they're continuing to reinforce his relationship with Maia. I'll have no complaints when they end up together.

I'm also pretty impressed how Subete has pulled himself together to become a capable villain.
"In the end, the world doesn't really need a Superman... Just a brave one."
Top

Boy oh boy, all the complaining i did about the constant usage of the first OP and ED songs and now with the way the second sequence came out, i'm suddenly wishing for the old ones back and all the while i can't get Yamaidare Darlin out of my head.

As for Akira's journey to the Dark Side, it was intense and worth every minute seeing his emotions all over the place with dedication. Only a risky move by Maia snapped him out of it and reinforced why they are the endgame meant for each other romance.
Top

New episode had a creepy pedo moment with some old guy peeking at mascot Karan's legs.

Also Hayato's message of having to tell the truth even if people prefer to buy the lie reflects a lot to real life so i could appreciate it a bit. The last few seconds of Akira appearing blurry to Maia had me wondering what will happen next week with their relationship since the next episode has "Fall In Love" in the title.

and i will say it again, the humor and serious is quite balanced. there were still laughs to be had despite the seriousness of ep 18. the above quote from hayato and Tsutomu's "i'm a second rate at comedian."
MOOK: ITS A YURI FANBOY!
Top

I'm actually pretty happy with how things have developed here. Feels like the relationships are progressing a lot better than in other shows.
"In the end, the world doesn't really need a Superman... Just a brave one."
Top
Post Reply
79 posts