The place to discuss anything relating to anime or manga.
Post Reply
307 posts

Well, it could be better, but I'm content for the most part. The only surprising thing to me was that they blamed Slaine for the plot to assassinate Asseylum, but I suppose it's easier that way for the peace effort, especially with him being declared dead.

LightningCount wrote:Also, I am curious how money from Earth will solve Mars' population/environmental problems. That statement didn't add up to me.

With money, they can buy resources from Earth. It doesn't help with the underlying cause of the problem itself, but as long as trade can be established between Mars and Earth, the Martians can still survive.

One wonders why a few Orbital Knights didn't carry out some attack or another against the Earth, regardless of the princess (though, I know they left that open-ended).

It's probably because they don't want to risk a civil war with others who chose to remain loyal to Asseylum. But some of them are still keeping the territories they've acquired, so it's not all good news for Earth.
Top

What the hell does G-Reco have to do with anything? It got a full run and unlike AZ it was never intended to go beyond it's run.

As to the Knights, there's clearly some of the clans who aren't happy. As they said there are many who are still occupying territories on earth, and don't support Princess Ass-sylum.

And don't exactly count Slaine out yet. The wheelchair princess is still out there. And the final battle showed that even after everything came out, they were still willing to disobeye their final orders and went to fight. Even that one count, who had reason to hate Slaine followed harklight.

Most of the clans overall probably aren't to happy with her stupid "Let's have peace like nothing bad ever happened". That's part of her problem, she's so naive and doesn't understand the real world, speficially for those who actually fought the war, her peoples suffering in their ****y class system, and so on. I doubt the Knights who lost all their comrades and friends are just going to sit there being abaondoned due to the new empress, when there's another princess out there who wants to wreck the Vers system more than anyone.

As to the next season thing, it wasn't announced but apparently the head writer ro someone important was already signed on to do a third Aldnoa Project.

And as t othe Zero, if it does have a meaning, it's probably because this whole thing was just the starter to the real upcoming series, the full out Vers VS vers VS earth war: Slaines Counterattack.
Top

Lord Dearche wrote:Most of the clans overall probably aren't to happy with her stupid "Let's have peace like nothing bad ever happened". That's part of her problem, she's so naive and doesn't understand the real world, speficially for those who actually fought the war, her peoples suffering in their ****y class system, and so on. I doubt the Knights who lost all their comrades and friends are just going to sit there being abaondoned due to the new empress, when there's another princess out there who wants to wreck the Vers system more than anyone.

What are you talking about? Where was it said that anybody is being abandoned?
Top

So, the big A/Z website countdown I noted finished, but I don't see any announcement about a new project. If anything, I guess it's some bonus CD drama (or behind-the-scenes) or something? The website is in Japanese, and what appears to be the accompanying video is region-locked, so it's hard to figure out for me. If I've grabbed the correct text, what appears to be the announcement says in Google translate: "I has released a Blu-ray & DVD whole volume conjunction purchase bonus original drama audition video CD 'light magic girl Serum'" (I assume it's something about Asseylum.)
My Mecha/Scifi Novels: https://www.goodreads.com/series/168677 ... -war-arm-x
"May you rest in peace, the betrayed and outraged Milliardo Peacecraft."
Most-Wanted Gundam Anime: Episode Zero, Blue Destiny, Rise from the Ashes, Crossbone
Top 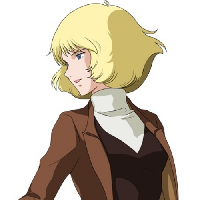 I really hate to be THAT girl by harping on this again (but I promise this is the last time)...but as Lightning Count already said, we had no explanation for Inaho. I guess we just have to accept that he is the only person who knows how to do physics in the ENTIRE Earth Sphere. I will admit that his eye did do SOME useful things later in the season! So much so that I think it's existence is justified to a point. I will also give the show props for actually making the crew of the Deucalion work together as a team during the last few episodes (and not just have Inaho fight the enemy 1v1 all the time) of S2. Better late than NEVER.

Spoiler
Show
I am just going to put this in spoiler, so if you like Inaho and don't want to read this, you don't have too (sorry monster).

I just personally wish Inaho died at the end of season 1, giving the remaining cast time to shine and grow in skill in the next season. Others have already said that most of the cast's time was stunted this season. I agree.

Imagine how interesting it would have been if Aldnoah Zero gave one of the other pilots the robotic eye surgery! Rayet could have become the protagonist for example! Fighting for revenge, but trying to overcome her prejudices against the Princess and Vars in general for what they did to her father. It would have tied into her development last season and would have been a subversion of expectations of Inaho vs Slaine...AGAIN...

Inko could have been her conspirator when she released the Count and look at that! Half the cast is given interesting things to do! We could have developed the relationship between Marito and the Captain further, the XO, Kaoru Mizusak, could have been given a moment to shine and take command, Yuki could have worked together with Rayet in dealing with her grief and anger towards the Martians, Calm could have become a pilot again to honor Inaho's memory... But all this is just fanfic wishing...

Yet the amount this story would have been improved without the blank-slate Inaho to bog things down with his "awesomeness" would have improved the story immensely. IMO of course, but given how Inaho and the Princess had little interaction this season, what was the point of keeping him alive? Besides just wish-fulfillment, and continuing the shipping battle of last season, I just do not see a very good purpose for Inaho this season...and I probably never will...
Overall I thought Aldnoah Zero was fun. I just have some strong feeling about Inaho, but that does not mean I did not enjoy the ride. I also love how this show has drawn so many people into the mecha genre! A lot of friends, who never had an interest in this genre before, are now coming to me asking for things to watch now that A/Z is over! I am no longer just the girl-who-watches mecha...but I am the GIRL who WATCHES mecha shows!

So at the very least, I appreciate A/Z for this opportunity. And I hope that if we get more, be it OVA, another season, ect, I hope we get some combat on Mars. Seriously, I have wanted to see battle on that planet since Gundam Age teased us that in its SECOND OPENING...and did NOT deliver!

Anyone know of any other mecha shows coming out in the next few seasons? We still have Fafner, but that is just going to last until the end of Spring. Or maybe is now a good time for me to finally watch Macross 7?
For 2000 years I lay dormant, now I have returned to bring good cheer to you all once again!

Don't worry, I don't dislike reading something I don't necessarily agree with as long as the topic itself interests me.

what was the point of keeping him alive?

If we're only talking about season 2, then he's the only one connecting the two sides together. If you think the level of interaction is bad now, then killing Inaho would be worse.

Of course, I don't consider Inaho a problem anyway, so I wouldn't want him dead either way. As I said before, it shouldn't be that hard to have the other characters do more without changing Inaho at all. It's not like Inaho's character/personality is someone who would feel threatened if someone else were to take the initiative. He only ended up taking charge by virtue of everyone else relying on him.
Top