The future is now. This is the place for mecha and science.
Post Reply
59 posts

Figured this was the most appropriate place for what seems to be essentially a Nanoha MSV series. More proof that Nanoha is a mecha show disguised as a Magical Girl show.

This weapon is an not a "magical device" (hereinafter referred to as "device"), but an armed interface being produced as a "magic-driven weapon."

It is developed and manufactured with the order of the TSAB Mid-Childa headquarters, by the Weizen-based device manufacturer Caledfwlch Technics, for medium range air/land artillery duels. Currently testing is being carried out in the Takamachi team of Squadron 5. The person in responsible of the testing is the leader of the Takamachi team, Captain Nanoha Takamachi (25). As a gesture of courtesy by Caledfwlch Technics, the weapon has been painted in "Strato Blue" and "Shine White" in accordance with the personal call colour of Captain Takamachi. (Also, Unit 02 of the same model has been painted in "Magma Red" and "Sapphire Black" in accordance with the personal call colour of First Lieutenant Vita, the co-leader of the Takamachi Team.)

Usually magical devices channel the magical power of the users and directly output it as "bullets" or "barriers."* However, the core function of the CW Series of armed interfaces (including the aforementioned model) is to instantly convert the users' magical power into impact shocks, solid destruction cannon fire, protective barriers and etc. Therefore, they are effective counter weapons against enemy devices with magic neutralization property such as "AMF" or "Zero Effect." They are also test devices for the "personal-size practical high-speed magic conversion technology."

Nevertheless, a problem unveiled during the testing stage is the lack of sufficient strength and reaction speed of the instruction team members. As a result, only Captain Takamachi's Unit 01 is planned to be put into field testing. Technical Officer and Device Chief Atenza Mariel is now optimizing the Unit for Captain Takamachi's exclusive use.

Although little information has been disclosed, it is known that the long gun barrel has the function of rail accleration in its "Open" mode. In its "Close" mode, the device may be used as "Assault Lance" or "Heavy Sword."

A mode which Raising Heart autonomously elected to enter in order to support Captain Nanoha Takamachi (25) as both of her hands are occupied for the use of Strike Cannon. In this mode, Raising Heart can behave as a "staff" and directly output the magic power of Captain Takamachi. At the same time, the blade edge, which shares the functions of device protector and flight stabilizer, also has the properties of "cutting weapon."
Vent Noir

Oooooh… me likey! I love Nanoha's magitech, and this is really nice. And yeah, Raising Heart has officially become a Fin Funnel now.
"WE ARE THE HARO. RESISTANCE IS FUTILE." - Ascension
"Sucks to be you. Sucks to be you." - Haro
"My godlike powers must be getting rusty." - Graham
Top

reminds me of Strike Freedom...

is this from the manga? as far as i read, no such thing appeared. or there will be a new anime season based on Force?

EDIT: okay, i get it already after a few google. not sure i like this though, but if this means more Figma then i am all for it 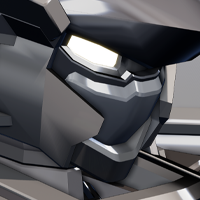 Wow. They went there. They really did.

Not that I'm complaining. I love Nanoha, and the design of this weapon is quite nice, as is the explanation behind its function. Hope to see more, considering I believe in StrikerS they stated that Nanoha was pretty much their go-to person for testing new technologies.
- Turinu's Design Compendium
- Turinu's Pixiv
- Turinu's DA
- Turinu's Sketchfab
Top

i am very excited for the next design. there is a high chance for it to be Fate's turn. or its Vita that have been mentioned there...
SD Gundam Capsule Fighter Online SEA IGN: 8bitNPC
Top

Next one is up:

No translation yet, I'll post it here when I find itt.
Vent Noir

Found this on the AnimeSuki Nanoha board:

And now, after being developed for six years, it's undergone extensive modifications. Shario Finieno, who helped create Mach Caliber, is also in charge of adjustments.

In addition to strengthening of the frame to withstand the strain of working in disaster zones and overhaul of the feet for high-speed mobility, the output method re-tuned to fit Disaster Prevention LPT Nakajima and her "special constitution" has also gained a formidable attribute of "power output will not fall more than 0.4% in situations where magical linking is impossible". Because of this, under any situation, "rushing to help someone in need" is Diaster Prevention LPT Nakajima's (21) story.

While the appearance has changed, Mach Caliber's AI is still the same as the days of Mobile Force Six, supporting Disaster Prevention LPT Nakajima (21) in both public and private matters as her "partner".

While being a relatively orthodox user of twin devices, in this case, another unit, an experimental device — AEC equipped "Sword Breaker" — has been issued. Installed on the left hand, it's announced to be "defencive equipment for hand-to-hand soldiers" — detailed functions have not been revealed.
[/quote]
Vent Noir

While being a relatively orthodox user of twin devices, in this case, another unit, an experimental device — AEC equipped "Sword Breaker" — has been issued. Installed on the left hand, it's announced to be "defencive equipment for hand-to-hand soldiers" — detailed functions have not been revealed.

Is it just me, or that Sword Breaker screams "PROTECTO SHADES!" (from GaoGaiGar)?
Top

While being a relatively orthodox user of twin devices, in this case, another unit, an experimental device — AEC equipped "Sword Breaker" — has been issued. Installed on the left hand, it's announced to be "defencive equipment for hand-to-hand soldiers" — detailed functions have not been revealed.

Is it just me, or that Sword Breaker screams "PROTECTO SHADES!" (from GaoGaiGar)?

It's just you. They apprently already did that move in episode 6.
Of course everyone was hoping for something that will allow Subaru to pull a Hell and Heaven, but I"m not sure we'd get to see that.
The Gundam wiki

Okay, there's a translation up with the omitted parts included on AnimeSuki:

Disaster Sergeant Subaru Nakajima is a relatively orthodox user of twin devices: her equipment includes the intelligent device "Mach Caliber" installed on her feet and the cartridge unit weapon "Revolver Knuckle" on her right hand. However, this time she has been issued a test model of "Sword Breaker" - an AEC equipment to be attached on her left arm. Detailed functions of the weapon has yet to be revealed. The only information published regarding the weapon is that it is a "Defence equipment for Melee Combat users."

Mach Caliber, a roller-blade-type intelligent device, has been long cherished by Disaster Sergeant Nakajima (21) of the Harbour Special Rescue Team as her exclusive device since its issuance to her whilst on assignment in Mobile Force 6. It is developed to fully utilize the potential of Sergeant Nakajima's (Private Nakajima at that time) manoeuvre support magic "Wing Road" and combat technique "Shooting Arts."

After more than six years since its original development, the device has received major upgrades and has been transformed into this new device, Mach Caliber AX. The enhancement work was done by Shario Finieno, one of the original developers of the device.

Besides strengthening of the frame to adapt to the harsh environment in disaster areas as well as redesign of the suspension to allow high-speed manoeuvres, the magic output mode has been adjusted to the "special constitution" of Sergeant Nakajima and improved to a terrific standard of specification, allowing "less than 0.4% reduction in performance during occasions where magical linking is impossible." These enhancements can enable Disaster Sergeant Nakajima to "rush to those who seek help" regardless of the circumstances, as mentioned by her.

Also, despite of the changes in outward appearance and internal mechanics, the AI of the device has been kept intact. It will continue to serve as a good "partner" to Sergeant Nakajima supporting both her public and private life.
Vent Noir

Early scan of the next entry, featuring FORCE lead Tohma

one question: how's someone is suppose to shoot that thing? or do we have another Squall here?

quasadra wrote:one question: how's someone is suppose to shoot that thing? or do we have another Squall here?

If it's a Belkan-style device, then that's the cartridge system: compressed cartridges of magic that allow for either powerful quick attacks or easily charging of magic spells. Nanoha and Fate both also use the Cartridge System to enhance their magical abilities. So, yeah, kinda like the Gunblade.
"WE ARE THE HARO. RESISTANCE IS FUTILE." - Ascension
"Sucks to be you. Sucks to be you." - Haro
"My godlike powers must be getting rusty." - Graham
Top

well, its still not sure whether Divider 996 is from Belka or not. they havent even tell us what the heck it is(and this include Lily). though ancient Belka is referenced a few times.

but
Spoiler
Show
Divider is seen to fire a BFG beam when Touma first activate it. and fully functioning as a gun during his fight with Veyron.
so it a real gunblade, both gun and blade. but they are all using magic, so maybe i shouldnt think too hard on it.

(rough translation from Bananoha on the AnimeSuki boards)

As the name "War Hammer" implies, it's an object with strong armour. It was designed and manufactured to crush gigantic weapons as its main purpose.
A large acceleration propulsion booster is installed in the rear section of the frame. It is able to penetrate at hypersonic speed, but in order to do so, its energy depends on the plasma jet.

Because the user testing this, TSAB's Aerial Combat Instructor - Lieutenant Vita, is small, it looks like a considerably oversized weapon. It's assumed that adults would find handling this impossible. Its present size and style have been decided as Lietenant Vita simply says, "it's a suitable size for myself."

Yeah uhm, don't quote me on anything. Techmagical babble makes me roll over in pain and everyone is sleeping.
Vent Noir

Return to “Mecha and Technology”